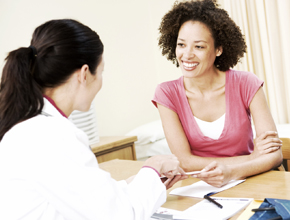 A person who has been infected by the human immunodeficiency virus (HIV) is diagnosed as having AIDS after developing one of the illnesses that the Centers for Disease Control has identified as an indicator of AIDS. An HIV-positive person who has not had any serious illnesses also can receive an AIDS diagnosis based on certain blood tests (CD4+ counts).
When HIV weakens the immune system, "opportunistic" infections can take advantage of this weakened state and cause illness. Opportunistic infections include Kaposi's sarcoma and pneumocystis carinii pneumonia. Many of these illnesses are readily controlled by a healthy immune system.
Having been infected with HIV (being HIV positive and having HIV antibodies in the blood) is not the same as having AIDS.

When infected with HIV, a person's body develops antibodies against the infection, and these antibodies become detectable in laboratory tests within three months. After taking a medical history and performing a physical examination, a doctor may want to do other tests, including:Women should also have a gynecological exam with a Pap smear and a pregnancy test.

Pregnancy presents special challenges in the treatment of HIV. Pregnant women should not take some drugs that are usually given to persons who are infected with HIV because they may cause birth defects.
It is not yet possible to predict whether a woman who is HIV-positive will pass the infection to her baby. Studies indicate that taking zidovudine (AZT) reduces the risk of passing HIV to the baby by almost 70%. It is also important for a pregnant woman with HIV to get regular prenatal care and stick with her HIV drug treatment plan.